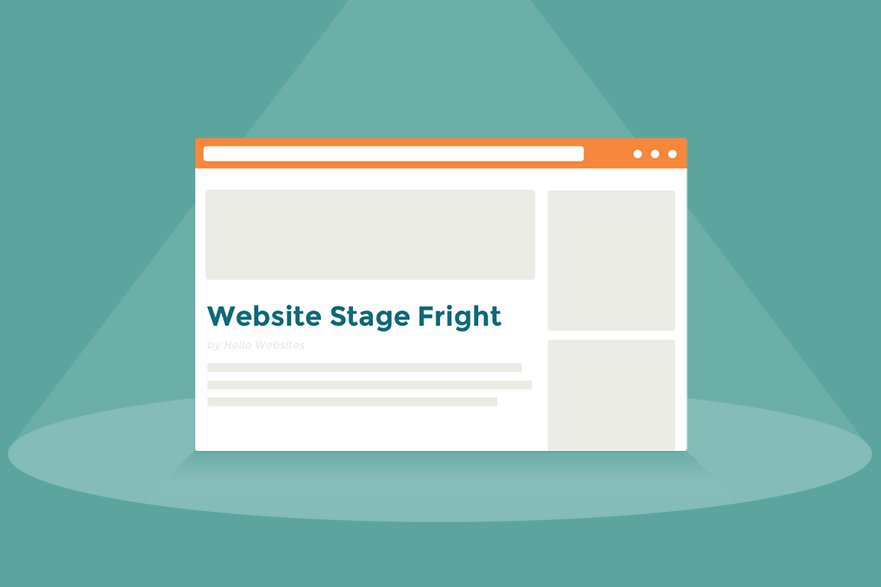 It starts with some butterflies making a home of your insides – that horrible, “I’m just going to embarrass myself” feeling that never quite goes away until you’ve had something to drink after leaving the stage.

Oddly, in the past couple of years, we’ve seen something in our clients when talking about their website, that we used to see only in media training classes about public speaking: early signs of stage fright.

We get it. It’s hard to do work in front of people. But it’s important that you do.

One of the biggest problems with many business websites is that they look – and act – like brochures! It’s even a common term the web design industry uses for a tier of small-to-midsize project; brochure websites.

We’re sick of it, because we think you deserve better. If you’re doing work people appreciate, and providing products that help people live and work better, why not take credit for that work?

The first step to getting past this worry is understanding where it comes from, and what particular concerns you’re having. Let’s look at a couple, and talk about why it’s important to remedy them.

“No one cares who I am, they just want what I’m selling.”

Actually, they do care who you are. We’ll be talking about this a lot in the coming weeks, so stay tuned. The upshot is that people trust people more than they trust businesses. Makes sense, right? Until we’re super comfortable with robots, human business – and the people behind those businesses – will keep succeeding.

You can ease out of this concern in a few ways. The most common suggestion we make is replacing stock photos with images of your products, or your store. You can do this without people in front of the camera, and it still does some of the work of humanizing your business, by displaying the real world situation you work in.

If you’re ready to step in a little more, then you can place images of yourself and your team on an About or Team page, along with some quotes from those members of your team.

Some people worry about their image.

“I don’t want my picture online.”

“My team doesn’t want to be on the website.”

This is a legitimate concern – and one you should be discussing with your team during the planning stages for your website. A lot of people are concerned about their privacy – so being identified online is not appealing. Others may prefer not to be connected to their company, so they can have more freedom to say what they want to say without censure or repercussions.

One of the best ways to counter this concern, or provide an easy way out for some key team members, is to use professional headshots and limited-use social media accounts. This is especially easy with Twitter, LinkedIn, and other networks either geared toward professional networking, or where having multiple accounts is easy.

It’s still worth respecting if someone really wants to stay off-the-radar. However, by using professional-only images, and professional-only social media accounts, it’s easier to separate someone’s work life and information therein from their personal, private lives.

Granted, that’s a bit glib, but having content – and making sure that content is clean and consistent – is just so important. It’s really hard to come up with excuses to go text-light these days, between content marketing being such a big thing, and search engine optimization requiring information to work with.

Hiring a copywriter doesn’t always mean handing over an extensive amount of work. We’ve consulted with a number of clients to help them develop their content plans and create outlines for their website’s various pages – and then left them to the easier work of actually writing the text.

Very often, just having a second set of eyes look over your plans can make a big difference both to the content itself, and your comfort level developing it. Even if you can’t or don’t want to consult with an outside marketer, your team can probably help you here. Run your outlines past someone with a different level of comfort than yours – friends, family, coworkers – and you may find that the missing pieces begin to fall into place quickly.

No one’s asking you to become a celebrity or deliver speeches.

There’s a huge amount of space between just getting some words on a page, and writing a keynote. There’s also a lot of space between smiling for a picture for your website and/or social media profiles, and appearing on national television.

Just like with theatre or public speaking, website stage fright must be conquered by everyone. Even those who seem like naturals have struggled with it at some point – it may just be that they moved through that stage out of your sight, or they don’t remember it well.

People want to make social, human connections. The only way to do that is to show up in a human way, where people expect you to do so.